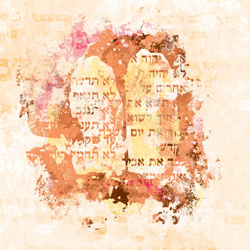 For most of the 20th century, Hebrew teachers dutifully taught pupils that the Hebrew alphabet had two “silent letters,” aleph and ayin.  While this may be true of Modern Hebrew, both letters were pronounced in Biblical Hebrew.  Eastern European Jews continued to pronounce the ayin until at least the 1700s. Ayin and aleph are still pronounced in the Synagogue Hebrew of Sephardic and Middle Eastern Jews.

The sound of an aleph is the same as the “catch” between the syllables “uh” and “oh” in the exclamation “uh oh!”  Likewise, American teenagers often substitute an aleph for a “T” at the end of a word.  (If you listen carefully to how your teenager pronounces the words “at home,” you may hear an aleph substituted for the “T.”)

But the ayin?  Hebrew grammar books dating back to the 1800s claim a person cannot pronounce an ayin unless trained to do so from an early age.  Nonsense.  While ayin is not a sound of Standard English, it is a common feature of certain speech defects, where ayin is substituted for the sound represented by the letter “L.”

When Tom Brokaw anchored NBC news, comedians poked fun of his inability to pronounce “L” properly.  His speech impediment was often described as “swallowing his L’s.”  (To this day, mimicking Brokaw saying “Lois Lane loves lizards” puts a smile on our face.)  In reality, Brokaw merely substituted the ayin sound for a Standard English “L.”

With Brokaw’s retirement, we are blissfully spared his atrocious diction.  But the voice-over artist for Samuel Adams beer commercials on radio and television regularly substitutes an ayin for an “L.”

So, if you can imitate Brokaw or Samuel Adams commericals, you can pronounce an ayin.  Who knew it was that simple?  As Bart Simpsonstein might say, “Ayin caramba!”