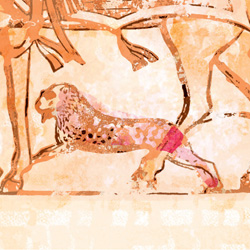 After a While, Crocodile.  By expelling the Jews from England in 1390, King Edward I retarded Hebrew scholarship for centuries.  So when King James I ordered a new translation of the Bible in 1604, Hebrew dictionaries and grammar books were rudimentary.  Occasionally, the translators sought divine inspiration to understand obscure Hebrew words.  Naturally, some interesting errors resulted.  Modern translations generally rely on the King James Version, which has acquired prestige with time.  As a result, the errors are often retained and polished, but not corrected.

One interesting error concerns a reptile known in Hebrew as a tannin.  In Exodus Chapter 4, Moses and Aaron inform the Israelites that God will free them. In the next chapter, the pair tell Pharaoh to release the Israelites to serve God.  Sarcastically, Pharaoh asks, “Who is Adonai that I should obey him?  I don’t know Adonai and I won’t release the Israelites.”  He then  worsens the people’s burdens.  Moses and Aaron visit Pharaoh a second time, and Moses tells Aaron to throw down his staff, which turns into a tannin.  Unimpressed, Pharaoh’s magicians do the same, but Aaron’s tannin eats theirs.

The King James Version translates tannin as serpent, a large legless reptile.  Yet the related Arabic word means dragon, a large four-legged reptile, and the related Egyptian word, stnn, means raised up off the belly, a characteristic of a legged creature.   And elsewhere, tannin clearly means crocodile, a large four-legged reptile.  Of course, the King James translators had probably never seen a crocodile, and their mistranslation is “close enough for government work.”  But the mistranslation is not trivial.  It hides the significance of the entire event.

Specifically, each pharaoh bore the title “the Great Crocodile,” among others. The title referred to the ruler’s power of life and death over his subjects.  It also alluded to the god Sobek, patron of the pharaoh’s army and symbol of his authority, who was depicted as a man with a crocodile’s head.  Egyptians and Israelites would instantly have understood the transformation of Aaron’s staff into a crocodile as a direct challenge to Pharaoh’s authority and as a demonstration that Sobek, his patron, was powerless.  The eerie event discredited Sobek, in keeping with God’s promise to execute judgments on all the gods of Egypt.  As noted in The Exodus Haggadah, the remaining gods of the Egyptian pantheon are judged with each plague that follows.   But mistranslating tannin as serpent renders the event a mere parlor trick.