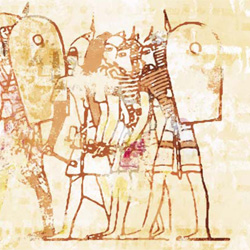 For two centuries, a popular sport among Biblical scholars known as “Minimalists” has been finding evidence that the Hebrew Bible has no historical value. In the mid-1900s, archaeologist Kathleen Kenyon, famous for excavating Jerusalem, asserted that King David never existed, because Kenyon had not uncovered any artifacts dating to the period of his reign. In fact, Kenyon’s Minimalist bias closed her mind to the possibility that further excavations would yield additional data.  And excavations since Kenyon’s death have yielded evidence of a thriving Jerusalem from the era of King David.
More recently, two Israeli archaeologists have gained notoriety by rehashing the thoroughly debunked claim that Biblical references to “camels” in the period of the Patriarchs and the Exodus are not historical, because camels were not domesticated until much later. (See, “Domesticated Camels Came to Israel in 930 B.C., Centuries Later Than Bible Says,” in National Geographic, http://news.nationalgeographic.com/news/2014/02/140210-domesticated-camels-israel-bible-archaeology-science/ )
The “camel argument” was raised in the 1940s and earlier.  (Joseph Free, “Abraham’s Camels,” Journal of Near Eastern Studies, Vol. 3, No. 3, Jul. 1944.)  And the camel argument has been discredited on archaeological grounds from the 1960s onward, with the discovery of camel bones and inscriptions concerning camels in Syria and elsewhere.  (See, K.A. Kitchen, “Ancient Orient and Old Testament,” Chicago: InterVarsity, 1966, pp. 79, 80, for evidence of the domestication and use of the camel in Syria and Mesopotamia in the second millennium BCE.  See, also, W.Y. Wiseman, “Ration Lists from Alalakh VII,” JCS 8, 1959, p. 29; and R.W. Bulliet, The Camel and the Wheel, London, 1975, p. 64, concerning 17th century BCE references to rations for camels in northern Syria.)
From a linguistic standpoint, too, the camel argument does not hold water. It presumes that the Hebrew word for camels, gmlym, has always meant camels, such that if gmlym appears in a text describing a pre-camel era, the text is not historical. The presumption is foolish. Words are not unchanging markers like Carbon 14.  Languages change in ways Carbon 14 does not. Old words are recycled, acquiring new meanings and losing old ones.  Indeed, the current meanings of “bull” and “train”  differ greatly from those of 15th century English.
As to camels, we know that Akkadian and Hebrew each inherited the root g-m-l from Proto-Semitic, along with several meanings of that root.  Late Biblical Hebrew retained at least three meanings: (1) kindness, (2) a bend, and (3) camel.  Akkadian retained a fourth Proto-Semitic meaning that is not attested in Late Biblical Hebrew: a type of ox, presumably used as a beast of burden.  Thus, we must not assume that gmlym meant camels when used in the Book of Exodus.  Rather, gmlym may be a linguistic fossil, a word whose form has been preserved intact for millennia although its meaning changed.  Gmlym may have meant “beast of burden” in Early Bibical Hebrew, and shifted to “camel” by the time of Late Biblical Hebrew, just as “prove” meant “test” in Shakespearian English and shifted to “establish as a fact” in Modern English.  (E.g., “the exception that proves the rule.”)  Indeed, the Book of Exodus contains several linguistic fossils that make sense if and only if an archaic meaning is ascribed to them.
The moral is: the sport practiced by Biblical Minimalists is as much a matter of faith to them as the religion practiced by Traditionalists.