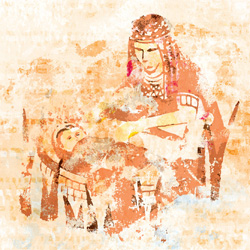 Parts.
An ideal translator exactly reproduces the meaning of a text from one language in a second language.  Exact translations are possible when the author of a text and the translator are contemporaries in the same culture.  So in Belgium, where French and Dutch speakers live side by side, exact translations from one language to the other are possible.  But exact translations from ancient to modern languages are rare: Cultural differences and poor understanding of ancient vocabulary and grammar hinder the translator.  Nonetheless, if a translation of an ancient text suggests that ancient people differ from modern in basic ways, a critical reader should suspect that the translator has failed to grasp a cultural difference or has misunderstood vocabulary or grammar.

In that regard, when a baby is born, a doctor or midwife quickly looks at the baby’s genitalia and calls out “It’s a boy!” or “It’s a girl!” to the curious parents.  The midwife does not look at the bed to determine the baby’s sex.  Yet translations of Exodus state that the midwives looked at the birthing stool, not the baby’s anatomy, to determine its sex: “When ye do the office of a midwife to the Hebrew women, ye shall look upon the birthstool: if it be a son, then ye shall kill him; but if it be a daughter, then she shall live.” (Exodus 1:16, JPS translation, 1917.)  The midwives’ purported behavior runs counter to common sense, rendering the translation look upon the birthstool suspect.

The word translated as birthstool is אָבְנָיִם (’ovnayim).  It is usually translated as “birth stones” because its root, aleph-bet-nun, can pertain to stone and because Egyptian woman are said to have placed each foot on a flat brick while giving birth.  But in Hebrew, the root aleph-bet-nun also pertains to reproduction: banim means sons, i.e., male offspring, and banot means daughters, i.e., female offspring.  Moreover, the Hebrew suffix -ayim in the word ’ovnayim is the common plural for body parts, suggesting that ’ovnayim refers to a body part, not a birthstool.  Classical Arabic lends support to this notion: the root aleph-bet-nun almost pertains to offspring and birth.  In Akkadian, that root pertains to organs, such as abunnatu, (“navel”), where the birth cord attaches to a newborn.  Finally, the obvious body part a midwife would inspect to determine a baby’s sex is its genitalia.  Thus, a more reasonable translation of Exodus 1:16 might be:  “When you midwife the Hebrew women and look at the [baby’s] genitalia, if it’s a boy, kill him.  If it’s a girl, she can live.”