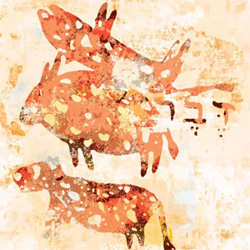 “He Wrestles Bears.” We would almost certainly scoff at a new neighbor who declared “When I wrestle a bear, people will know my name!” Boasting is unseemly and bear-wrestling is a poor way to teach one’s name, unless the name is He-Wrestles-Bears.  Yet at least 11 times in Exodus, God declares that when he does some deed, Egyptians and Israelites will know that he is Y-H-W-H. If the divine name is merely a personal name like “Bob,” God seems to be off track.  But if Y-H-W-H is a statement, like He-Wrestles-Bears, we’re dealing with a horse of a different color.

Many Hebrew names are in fact statements: Yisra’el (He-Wrestles-with-God) is one example. So viewing Y-H-W-H as a statement comports with Hebrew usage.  Further, Exodus 3:14 provides evidence that God’s name is a statement.  There, Moses asks how he should answer Israelites who want to know the name of the God who sent him.  God responds, “E-H-Y-H,” which means I AM: “Tell the Israelites this: ‘I AM has sent me to you.’” In other words, at least one of God’s names is a form of the verb to be.

In Hebrew, all forms of the verb to be derive from the root H-W-H.  In the simple conjugation, the root letters change slightly: the W becomes a Y, to yield the form E-H-Y-H of Exodus 3:14. But in the intensive conjugation, all letters of the root remain unchanged, i.e., the W remains and does not change to a Y.  And just as the name E-H-Y-H is a verb in the simple conjugation meaning I AM, the form Y-H-W-H may be a verb in the intensive conjugation meaning “HE CAUSES TO BE.”  In other words, the divine name Y-H-W-H seems to be a statement that God brings into existence all that is.

The hypothesis can be tested. In Exodus, each Plague demonstrates that God is the cause of each force of nature that Egyptians ascribed to their gods. The statement that Egyptians will know “I am Y-H-W-H when I turn the Nile into blood” makes no sense if Y-H-W-H means “Bob.” But if our hypothesis is correct, it is consistent with the demonstrative purpose of the Plagues: By turning the Nile to blood, God will certainly cause the Egyptians to “know that I am He Who Causes to Be”– God, and not the river-god Hapi. And by causing frogs to proliferate, God certainly demonstrates that God causes fertility, not the fertility-goddess Heqat.